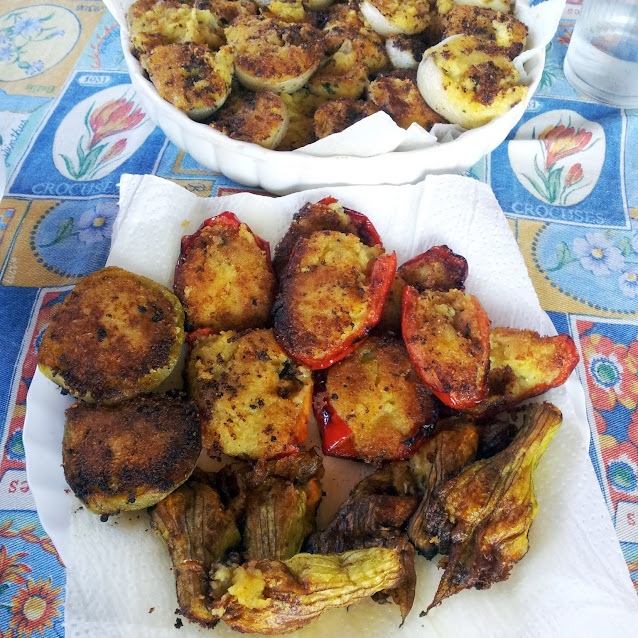 Or, I should say, “Seùlle, Peverùi, Sucùi e Sciue Céne”
Which, in my native Ligurian dialect means “Stuffed Onions, Bell Peppers, Squashes and Flowers” (yes, you get the usual unsolicited bit of linguistics in the recipe… I can try to approximate the pronunciation if you are curious).

Check out the full gallery with useful captions here on Google+ to see all the steps of the recipe.

This is one of my mom’s recipes, and as always it has variants across the whole region, but this is my mother’s version and is the one I love since I was a kid.

Also, if your dietary restrictions allow for cheese (parmigiano) and eggs, then your are good to go: this is another “mostly vegetarian” recipe of the Ligurian tradition. I’ve never seen one without these ingredients, but if you do the vegan experiment, let me know: apart for risking some breakage… they should be quite good anyway.

A note on the ingredients… I guess my mom is the one that taught me not to bother too much with the exact quantities (a recurring trend with my recipes, isn’t it?) so… there you go, no precise amounts in this recipe, either.

This recipe is a bit longer than usual, so I stockpiled on pictures: between my instructions and the photos (and their captions) it should be fairly clear.

Tools:
* A large bowl
* Potato masher. I’m not sure how common this tool is abroad. Check the pictures to see which kind. If you don’t have one you’ll have to find a way to perform the same functions (you’ll see later).
* A large frying pan
* Mezzaluna knife (optional but useful)

The fill:
Clean and cut the squashes in 3-4cm chunks and the onions in halves. If your squashes are big and ripe enough they’ll have big round “heads”. Put them in, but only cut them in half and don’t mash them, you’ll use them later. Boil them in abundant salted water: they have to be cooked enough that the squash can easily be… well, squashed 🙂
Same goes for the potatoes. Boil them, preferably with the skin on to prevent them disintegrating in the water. Again, they need to be softened enough to be mashed.

Use a colander to dry the squashes, potatoes and onions.

Now take the potato masher (there is a picture of the device I mean), peel the potatoes (careful not to burn your fingers!), put a couple of them in and squeeze hard! Don’t overfill the masher, it will be super-hard to squeeze and you won’t save much time on the whole.

After the potatoes it’s time to work on the squashes. Put some pieces in, and careful now: close the masher, put it on a spare bowl (the one in the picture holds the potato peels) and squeeze lightly to let the excess water out. Not only the squashes tend to retain water, but they are quite watery themselves. When you notice it’s green juicy stuff coming out instead of water, switch to your potato bowl and squeeze.

When you are done mashing the squashes, mix them and the potatoes with a spoon.
Then, grate a good amount of Parmigiano on the bowl, then mix again.

Now take some basil leaves, chop them, then reduce them to bits (using a mezzaluna knife, or otherwise), then sprinkle them on the bowl, and mix again.

Separate the yolk of an egg, and add that too to the mix: it will help the whole thing to stay together.
Then, add a generous pinch of salt, mix, spread some breadcrumb and mix again. Whee! The fill is ready!

Take the onions (hopefully they are now just warm, but be careful), and start separating the layers. Be careful, you need them whole, because you’ll be filling them like little cups. The smallest, innermost layers aren’t useful for this recipe… you can just eat them right away if you are so inclined ^__^
Keep the “onion cups” spread on a surface, you’ll soon need them again.

Take the zucchini flowers (please, only do this if you have access to some proper, big flowers: the tiny things I’ve seen in supermarkets are super pricey and will probably be too small), carefully remove the stigma and styles from the inside, and the green (and slightly spiky) sepals and bottom of the flower. You should obtain some nice empty flower-tubes (see picture).

Now to the bell peppers: cut them too in pieces big and curved enough to act as cups (carefully remove the seeds and white bits), then put them on a grill for a while: they need to soften a bit, but don’t let them burn. As you can see in the pictures, they are only a bit shriveled and you can pick up the grill lines.

What you see next is one of the “big head” halves of the trombetta squashes, if you have any: remove the inside with a spoon (it’s often full of tiny “seedlings” so it’s not that appetizing anyway) and make cups with them, too.

Take the flowers and very carefully fill them with the mix from the bowl using a spoon: watch it, they rip easy. Fold the top of the petals, and you have a nice closed pocket.

Fill the onions: you want them to go very slightly over the brim.

Same with the peppers, and the squash heads.

Spread breadcrumbs on the exposed filling: this will help forming a thin crust that will keep the thing together.

Ok, take your large frying pan, cover the bottom in oil, heat it. Start with the onions: put them with the filling facing down. This is important: starting the fry on that side will help the general cohesion of the filling. You don’t want it to break, or lose too many bits in the frying pan (they start to burn very fast). So, cover the whole bottom of the pan, and let it fry.
Check the bottom side of the onions: when you see that nice brownish crust, turn them on the other side, and let the onion cook, too.

Have a serving plate handy, covered with kitchen paper towel to absorb the excess oil. In the close-ups you can see one of the onions, expertly cooked (I’m getting hungry just by looking at it).

Keep swapping the onions in the pan until you run out. Throw away the oil and start from scratch, if you have a lot and it starts having too many burned bits in it.

Now proceed with the rest of the veggies: same procedure with the peppers and squash heads. The flowers obviously don’t have an upper side, so just remember to flip them over. The photos show how they look when they are ready: mostly green, with the orange and tender petal tops browned and shriveled.

Serve your Seulle Cene (and Sciue, Peverui and Succui) hot… or not. They are just as good when cold, in the evening or the day after.

Note: this is a repost from my g+ account.

A Scoundrel in the Deep

...I'm on fb too, but I rarely accept unknown strangers' contacts. Be patient. Or shoot me an email, I'm easy to find.

🔐 In case you want to securely contact me, here is my Keyoxide proof for my PGP key